Do couples, on average, have an easier time getting pregnant after having had one child?

Everyone knows a couple who struggled to conceive the first time around, only to fall pregnant at a drop of the hat the second time around.

My husband and I are one of these couples. We took over a year to conceive my first, but then our second was a complete, first shot out of the barn surprise.

Back when my first was born, as we were getting ready to head home after three long days in the hospital, with round-the-clock wake ups, I made the mistake of telling our delivery nurse that we were not planning to use birth control.

Although she briefly made me feel like an errant irresponsible teenager, I confess to not not having taken her advice very seriously. After all, most reputable sources of medical information, such as WebMd, state unambiguously that the prior births do not “reset” a woman’s fertility. They claim the whole idea is a myth.

Two recent studies, however, suggest the naysayers are the ones who are mistaken. There might just be something to this idea after all.

Kenneth Rothman of Boston University, led a prospective study, which followed 2820 Danish couples who were trying to conceive for up to 12 cycles.

Rothman then calculated how the woman’s age affected a couple’s fecundability ratio–a statistical estimate of a couple’s ability to conceive each menstrual cycle.

Couples in which the woman had given birth before–about half of the couples in their early 30s and two-thirds of those in their mid to late 30s–had much higher fecundability throughout their 30s: 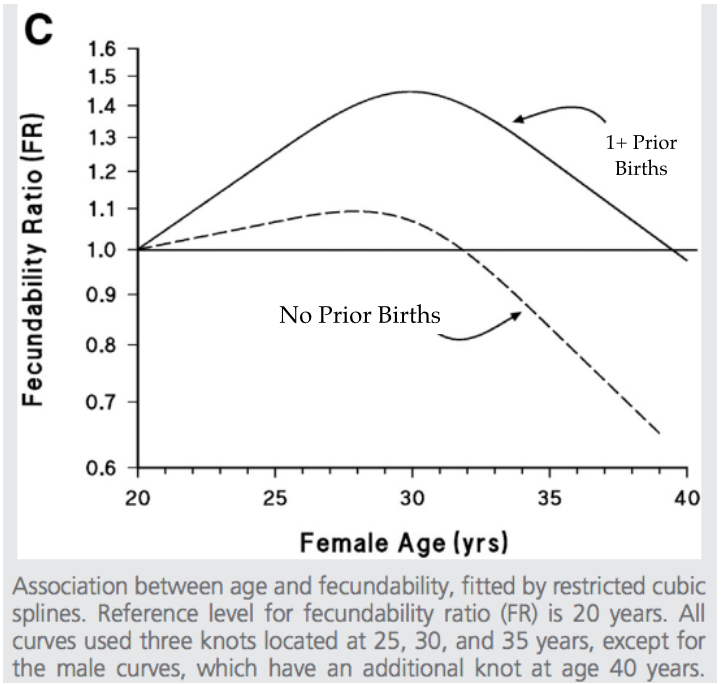 Until age 30, women who had never given birth have roughly the same fecundability as a 20-year-old. Starting sometime in their early 30s, though, these women’s fecundability began to decline, and by 35, their fecundability was significantly lower than the average 20-year-old’s.

By contrast, the fecundability of women who had one or more births under their belts remained higher than a 20-year-old’s through their mid-30s.

(Note that the curves above are based on estimated fecundability at three ages–25, 30, and 35–and therefore are not informative about what happens after 35.)

A second study, led by Geoffrey Howe of Oxford University, paints a very similar picture. Instead of fecundability ratios, Howe used a different–and arguably superior–measure of fertility: how long it took women to give birth.

Howe tracked 17,032 women in their 20s and 30s who attended family planning clinics in Scotland and Great Britain. From 1968 to 1983, 4,108 of these women stopped using birth control in order to have a baby.

Here’s how long it took women who had never given birth before to have a baby:

As you can see, starting around age 34, women who have not given birth before took longer to become pregnant.

The difference between these groups of women is striking. By the test of fertility that arguably matters the most–ultimately ending up with a baby–women who had given birth before and started trying for another at 40 were better off than were women who had never given birth before but started trying at 36 or 37 (18% did not have a baby after 60 months versus 25% did not have a baby after 60 months).

(These percentages sound scary. But these numbers probably overstate a woman’s current chances of remaining childless, as infertility treatments have advanced considerably since the 1970s and 1980s.)

Do these two studies prove that giving birth “resets” a woman’s fertility? Can giving birth turn your biological clock back several years?

Not exactly. These studies demonstrate a link between having given birth before and being able to conceive later in life; they do not establish causation.

What else might be going on? Well, selection bias, for one.

Couples who have had a child in the past tend, as a group, to be more fertile than couples without children. This is because of sorting that occurs during the early reproductive years. During this time, the less fertile will tend to remain childless, while couples of high fertility will be more likely to conceive quickly or by accident. So, by the time the group without children reaches their mid-30s, they disproportionately include the less fertile.

But regardless of the underlying reason, the upshot is the same: if you have already had a baby, your chances of having another one in your mid to late 30s look pretty good.

This post is the first in a series of posts on different aspects of fertility–miscarriage, infertility treatments, and male fertility issues, among others. If you have a story about getting pregnant–or about struggling to get pregnant–I would love to hear from you. You can share your story in the comments or message me privately at @xpectingscience on Twitter.

Did you have an easier time conceiving after giving birth?

6 thoughts on “Does Giving Birth "Reset" a Woman's Fertility?”