Several years ago, before I was married or had even begun dating my husband-to-be, I was chatting with a reproductive endocrinologist about when I needed to worry about my fertility going into decline. I was about to turn 30. Should I be worried? And how many quality reproductive years did I have left?

She told me most women were fine at 30 or 35. At her clinic, she said, she rarely saw women with problems related to “advanced ovarian age” before they turned 37 or 38.

I was surprised, to say the least. Like so many women, I had heard ad nauseam about “getting pregnant after 35.”

Despite all the chatter, I was not actually clear on why 35 was an important cutoff. Was it because getting pregnant was more difficult after 35? Or staying pregnant became challenging after 35? Or was that the age when the risk of chromosomal abnormalities like Down’s syndrome rose dramatically?

It turns out that none of these reasons are correct. Because in fact there is no reason; age 35 is not actually a cliff. It is not even a sharp bend in the curve, a point at which birth rates go into a steep decline. Those sharp bends come later, after 37, and again after 40.

So why has age 35 been etched into our consciousness?

The belief that 35 is a reproductive cliff stems from the old guidelines on when to recommend invasive diagnostic testing for chromosomal abnormalities like Down’s Syndrome. Following the old guidelines, doctors recommended non-invasive screening–blood tests and ultrasound scans–to pregnant women under 35, whose babies face a relatively low baseline risk. But to pregnant women 35 and older, doctors recommended invasive diagnostic tests–amniocentesis or chorionic villus sampling (CVS)–that carry a small increased risk of miscarriage.

Why was 35 chosen as the cutoff for invasive diagnostic testing? Because that is the age at which the risk of any chromosomal abnormality (about 1 in 200) was roughly equal to the increased risk of miscarriage from undergoing invasive testing. (Exactly how much amniocentesis and CVS increase the risk of miscarriage is disputed, but most estimates now put the increased risk at 1/200 to 1/400 for amniocentesis and 1/100 to 1/200 for CVS.)

When I tell friends about this, the typical reaction is outrage. Why would anyone assume that women weigh these two  very different outcomes–having a child with a chromosomal abnormality or having a miscarriage–equally?

Worse, why assume that all women assign these outcomes same weight? Surely some pregnant women will prefer to avoid a miscarriage at any cost; some will want to know with certainty whether their baby has a chromosomal abnormality; and for others, their decision will hinge on the relative risks.

The old rule about when to recommend invasive testing was essentially arbitrary, a line drawn in the sand by medical committee. In my opinion, it was a terrible decision and rife with the worst kind of medical paternalism. It took the decision about how to weigh these very personal risks out of the hands of pregnant women and placed it into the hands of their providers.

Fortunately, in 2006, The American Congress of Obstetricians and Gynecologists (ACOG) updated its guidelines on screening for Down’s Syndrome and other chromosomal abnormalities. Their revised guidelines state that all women, regardless of their age, should be offered both options, and emphasize that

“the maternal age of 35 should no longer be used by itself as a cut-off to determine who is offered screening versus who is offered invasive diagnostic testing.”

“a woman’s decision to have an amniocentesis or CVS is based on many factors, such as a family or personal history of birth defects, the risk that the fetus will have a chromosome abnormality or an inherited condition, and the risk of pregnancy loss from an invasive procedure.”

These changes are especially important because most babies with Down’s Syndrome are born to women younger than 35. This is primarily because most babies are born to women under 35. But it is also because not all babies are screened and because even those that are screened will occasionally be misdiagnosed. By definition, screening tests are not 100% accurate. Screening is prone to false alarms–when the screen indicates a chromosomally normal fetus has a high chance of having an abnormality–and to false negatives–when the screen indicates that a chromosomally abnormal fetus has a very low risk of having an abnormality. The only way to know for sure that your baby does not have a chromosomal abnormality is to undergo invasive diagnostic testing.

When and Why Does the Risk of Chromosomal Abnormalities Rise?

Instead, as my reproductive endocrinologist friend intimated, the true bend in the curve occurs after 37 or 38 (as I discuss in much greater length here), and is reflected in miscarriage rates as well.

For example, here are the rates of miscarriage for women undergoing IVF in the United States in 2010. As you can see, rates begin to climb steeply after age 37.

The graph below shows how the risk of having a baby with a chromosomal abnormality increases with a woman’s age. Two important things to note: the risk does not start to rise much until after 37 or 38; and even at 45, the risk is remains less than 4% of all births. 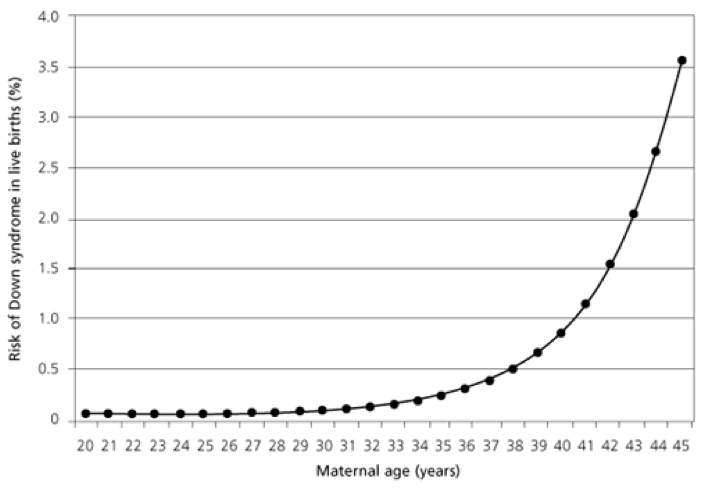 Although looking at graphs about women’s age and fertility can be depressing, there is also a lot of good news here. For one, fertility remains high in the mid-30s. And for another, fertility in the late 30s, although clearly in decline, remains fairly high for most women.

Finally, in terms of screening for chromosomal abnormalities, new tests that use cell-free-DNA to detect the three most common trisomies (Trisomy 13, Trisomy 18, and Down’s Syndrome), such as the Harmony test developed by Ariosa, are now available. Although not diagnostic, these tests are much more accurate than the old screening procedures (less prone to false negative or false positives) and, because they only require a simple blood draw, do not raise the risk of miscarriage. Moreover, they can be performed as early as 10 weeks gestation. Their one drawback is that they only screen for the three most common trisomies. Unlike amniocentesis and CVS, they cannot uncover other chromosomal abnormalities.

Note that because cell-free-DNA-based tests are so new, some providers will not mention them as an option to pregnant women. But you can request them. I requested for the Harmony test for my second pregnancy (it was not available during my first pregnancy). The test was expensive, about $700, only half of which was covered by my insurance. To my mind, though, the reassurance was well worth the expense.