Pregnancy can be cruel. Just when you are at your most swollen, bloated, and exhausted, sleep proves frustratingly elusive. Every night, you toss and turn, trying to find a comfortable position, your back aching, and your belly pressing down on your bladder. And then, as you finally start to drift off, you realize you need to pee.

To make matters worse, despite having an enormous bowling ball attached to your stomach, you are told you cannot sleep on your back:

“After 16 weeks of pregnancy, experts advise women to not sleep on their backs, but rather should lie on their sides, ideally the left side.” – mamalette

Who came up with this idea?

This advice stems three studies that have linked back sleeping with late stillbirth (pregnancy loss after 28 weeks). (Interestingly these warnings predated the three studies, so they are not exactly the reason women are told to avoid back sleeping)

I described the first two studies, one conducted in Ghana, the other in New Zealand, in an earlier post, and concluded that not only did they provide no reason for alarm, they certainly do not justify blanket advice again back sleeping.

In 2015, a third study came out linking back sleeping with late stillbirth. Does it change the overall picture?

Adrienne Gordon of the Sydney Medical School led the third study, which compared the sleep habits of 103 women who suffered from a late stillbirth (cases), with 192 control women with ongoing pregnancies.

What did she find? Back sleeping was linked with a 5-fold increase in the odds of a late stillbirth, and intriguingly, back sleeping was also more common among women whose babies had been diagnosed with intrauterine growth restriction (IUGR). (The Ghana-based study noted a similar link between back sleeping and IUGR).

This is interesting, because IUGR was more strongly linked with late stillbirth than back sleeping, leading to an 8-fold increase in odds of a late stillbirth.

Okay, so these findings, at first blush, sound pretty terrifying. But let’s dig into the details, because these tell a different story.

Of Numbers and Statistics

First, consider their data. Only a tiny, tiny number of women in the Australian study–just 10 cases and 4 controls–actually reported sleeping on their back, a difference of just 6 women.

So, yes, on the one hand 2.5 times more cases than controls reported sleeping on their back, a big relative difference. On the other hand, the numerical difference is small. So small, that it could be an artifact of the study’s design.

The Australian study, like the earlier two studies on this topic, employed a retrospective case-control design. Women were interviewed about their sleep habits during pregnancy after having a stillbirth. Controls were also asked to recall their sleep habits from a week earlier.

But when women who had stillbirths are generally better at remembering their sleep habits than are controls, then differences in recall can significantly bias the study’s results.

As it could have here: More controls than cases, 60% versus 45%, said they could not remember what position they typically slept in a week.

This potential for bias is a symptom of the broader limitations of case-control studies: They cannot determine causation. We cannot say from this study, nor from the earlier two studies which used the same design, what causes what. Perhaps women who sleep on their backs are at higher risk for stillbirth. Or perhaps women with smaller, at risk babies are more likely to find back sleeping comfortable. Or perhaps women with stillbirths have combed their memories for what went wrong and are more likely to remember having slept on their backs.

Is It Biologically Plausible That Back Sleeping  Would Lead to

In theory, yes, back sleeping could compromise blood flow to the fetus.

When a pregnant woman lies on her back, her unusually heavy uterus can compress a vein known as the inferior vena cava. The vena cava lies under the right side of the uterus and is the primary vein carrying blood back from the legs to the heart. Its compression (known as aortocaval compression) can lower blood pressure, causing dizziness, lightheadedness, nausea, and even fainting–a constellation of symptoms known as supine hypotensive syndrome.

Only a minority of pregnant women, 2-4%, ever experience these symptoms. If you are one of these women, you should avoid lying on your back.

But for most pregnant women, while lying on their backs slightly lowers their blood pressure, the effect is small, similar to the effect of standing. And no one, that I have seen, seriously proposes that pregnant women avoid standing. Barefoot or otherwise.

But what about the fetus? Is its blood supply affected by its mother lying on her back?

The research here is less clear. Positioning pregnant women on their backs does not affect fetal reactivity during nonstress tests, even when the women themselves experiences symptoms of decreased blood pressure.

But other studies of fetal blood flow have shown that while uteroplacental blood flow to the fetus decreases during compression of the vena cava, myometrial blood flow is unaffected.

Simply put, most fetuses appear to be able to tolerate this position just fine.

That said, it is possible that these slight changes in fetal blood flow would push an already vulnerable fetus over the edge, as some experts have theorized.

To date, three retrospective case-control studies have linked back sleeping with an increased risk of late stillbirth. Together, they give reason for caution, at least for women with other pregnancy complications. But these studies are far from the final word; all three were small, were not designed to determine causation, did not measure fetal blood flow, and relied upon women’s recall of their sleep habits.

Even in light of their findings, there’s no reason to believe that back sleeping is dangerous for women with healthy pregnancies. If you wake up one morning to find yourself sunny-side up, do not panic!

Dr. Halit Pinar, director of perinatal and pediatric pathology at Women and Infants Hospital in Providence, R.I., who studies potential risk factors for stillbirth, agrees. “At this stage,” he has said in response to Gordon’s findings, “I don’t think we can reach any conclusions about the effect of sleep position and come up with a recommendation.” 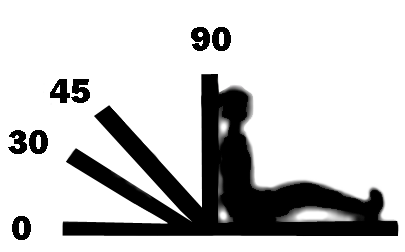 What if your pregnancy is considered high risk, because of high blood pressure, gestational diabetes, obesity, being past 41 weeks, or your fetus showing signs of  IUGR? Or you have an uncomplicated pregnancy but want to play it as safe as possible? Then you can easily shift your position slightly to avoid compression of the vena cava, by tilting yourself up to 30 degrees while lying flat on your back and then titling yourself about 10 degrees to the left by placing a pillow under your right buttock.

The most important thing to remember: Back sleeping is at most a minor risk factor for late stillbirth. Not smoking, not drinking heavily, not gaining too much weight during pregnancy, and getting regular prenatal care remain the best ways to lower your risk.

How did you sleep in late pregnancy? Were you told that back sleeping could be risky for you or your baby?