As part of their “baby-friendly” initiatives, some hospitals now require women to sign consent forms before receiving formula. These forms purport to list the “harms” associated with “a single bottle” of formula, and ask that parents signify their understanding that formula should not be given unless medically necessary.

On its face, asking parents to sign a waiver to receive formula, a long-used and widely available way of feeding babies, seems astoundingly paternalistic. But what I find most shocking are the allegedly “scientific” claims these forms make about supplementing with formula.

END_OF_DOCUMENT_TOKEN_TO_BE_REPLACED

In honor of World Breastfeeding Week (yes, yes, I know–it ended yesterday), we need to talk about a widely overlooked aspect of breastfeeding, its recipients!

END_OF_DOCUMENT_TOKEN_TO_BE_REPLACED

Children born by C-sections have about 20% higher odds of obesity, asthma, allergies, and Type 1 Diabetes, according several large research reviews.

But are children born by scheduled C-sections, as opposed to unplanned ones, especially at risk for health problems, as a recent New York Times piece claims?

“the data showed more health problems among babies born by planned C-section than among those delivered by emergency C-section or vaginal birth, even though the planned surgery is done under more controlled conditions. The finding suggests that the arduous experience of labor — that exhausting, sweaty, utterly unpredictable yet often strangely exhilarating process — may give children a healthy start, even when it’s interrupted by a surgical birth.”

A reader, confused by this New York Times piece, wrote to ask for my take. “Are planned C-sections really less safe?” she asked. “The actual study… didn’t seem to support what the NYTimes article claimed.”

And after reviewing the research myself, I have to agree.

The study in question, led by Dr. Mairead Black of the University of Aberdeen, and one of the largest and best-designed studies on long-term health following delivery by C-section, actually did not find more health problems among children born by planned C-sections than those born by emergency C-sections.

(The sole exception was an unexpected–and probably artifactual–increase in Type 1 Diabetes; more on this in a moment).

How Does This Study Fit in With What We Already Know?

Although C-sections have been consistently linked with poorer long-term health in children, scientists are still not sure why.

One possibility is babies miss out on the “sweaty and exhausting” experience of labor. The physical trauma of birth kickstarts the baby’s internal stress response, pumping cortisol through their veins, and giving their organs, including the lungs, the final push to full maturity.

“If a baby is born naturally, it comes into contact with bacteria from the mother, which might help with immune system development,” lead researcher Dr. Mairead Black told The New York Times.

Compared to babies born by C-section, babies born vaginally have a more diverse and healthy gut microbiome–believed to be critical for their development of a healthy, balanced immune system (one good at attacking pathogens, but not overly jumpy and prone to self-attack).

Or perhaps the issue is not C-section birth per se, but the hodgepodge of pregnancy and birth complications that often result in C-sections, such as stalled labor, intrauterine growth restriction, and preterm birth.

Black and colleagues followed over 300,000 full-term singleton babies born to first-time mothers in Scotland between the years 1993 and 2007. Roughly 4% were born by planned C-sections, and 17% by emergency C-sections.

As the researchers acknowledge, the apparent increase in Type 1 Diabetes was probably not caused by birth by planned C-section, but by some artifact of their study’s design, a third factor not adequately accounted for in their research.

How did the children born by C-section fare compare to those born vaginally?

Overall, children born by C-section, planned or emergency, were more likely to be hospitalized for asthma and had higher mortality rates during the first year of life as well as throughout childhood.

Contrary to earlier research, though, children born by C-section were no more likely to develop inflammatory bowel disease, Type 1 Diabetes, obesity, or cancer.

The NYT headline is misleading: Planned C-sections do not lead to worse health outcomes than emergency ones.

Why is birth by C-section associated with poorer health? We still do not know. Given the impossibility of randomized controlled trials for childbirth, we may never know.

But this study does have one take-away: missing out on labor-driven stress response is probably not the critical issue. If it were, we would see significantly worse health outcomes among children of planned C-sections than emergency C-sections.

As for the risks of C-sections overall, that’s too big of a topic for me to tackle here. But I will say this: C-section-driven health risks are minor. They are almost certainly swamped out by who we are–the genetic blessings and curses we bestow on our offspring–and what we do as parents.

(Not reassured? You can always swab your C-section-born baby’s skin and mouth with your vaginal secretions, as widely-respected gut microbiome researcher Rob Knight did after his wife’s emergency C-section. I certainly would.)

Earlier this week, I wrote about the alleged benefits of breastfeeding being vastly overstated.

My goal in writing that post was not to nurse some long-standing grudge against breastfeeding advocates. Nor was it an attempt to justify my own parenting choices: I breastfed both my children for well over a year.

(And yes, as some readers have inquired, I know just how wonderful breastfeeding can be. How breastfeeding your baby can be calming and joyful, even magical. But whether I found breastfeeding magical or a chore–or, in actuality, both–has nothing to do with whether it lowers the risk of asthma, or heart disease, or anything else.)

“Anyone who thinks this [my post] a solid piece of work needs to read my latest book, Milk Matters: infant feeding and immune disorder. No one has to prove that breastfeeding (the evolutionary and physiological norm that provides free stem cell transplants) makes a positive difference. Those who assume, claim or promote artificial feeding as safe or adequate need to prove that deviating from such basic physiological norms is safe, that there are no short or long term harms from doing so. …”

I am sharing this comment not because I find it particularly compelling, but because I think it nicely illustrates the problem with arguments made by many breastfeeding advocates: They start with the assumption that breast is best. And then, inevitably, they fail to scrutinize the evidence, no matter how flimsy, that supports that assumption.

And the evidence is flimsy indeed. Most of the alleged benefits of breastfeeding are found only in observational studies, which are widely acknowledged as biased. On average, breastfeeding mothers have a higher levels of education, higher incomes, and live in safer neighborhoods than formula-feeding mothers, granting their children an early leg up in life. Separating the effects of breastfeeding from these other advantages is next to impossible.

How do we know that these observational studies are biased? Primarily because we do not find the same benefits in better-designed studies–sibling comparison studies and the PROBIT randomized controlled trial. The only clear-cut benefit seen in these studies is a lower risk of severe vomiting and diarrhea during infancy. (For a detailed summary, see my earlier post).

To be fair, breastfeeding advocates are right, in a way. Breastmilk does contains numerous hormonal, antimicrobial, immunological, and nutritional factors not found in formula. This is why breastmilk helps protect against vomiting and diarrhea during infancy.

Before the advent of clean water, sanitation, and modern medicine, breastfeeding was frequently life-saving. In countries where access to these resources remains limited, it still is. There’s no bigger possible benefit than survival.

But these beneficial properties do not imply that breastmilk has any long-term benefits for the panoply of modern ailments: allergies, asthma, obesity, type 2 diabetes, and cardiovascular disease. We cannot claim such long-term benefits without sound empirical evidence. And that is entirely lacking.

If the American Academy of Pediatrics, and others were to say, “We recommend breastfeeding because it reduces the risk of severe diarrhea and vomiting during infancy, and because breastmilk contains unique immune, hormonal, and nutritional factors not found in formula, the long-term benefits of which are unknown,” I would have no problem with their claims.

But instead, they have chosen to present poor quality evidence as fact. Playing fast and loose with the evidence in this way undermines their credibility. Worse, it violates the trust that women have placed in them.

Breast is best is the mantra of most major medical organizations. Women have it drummed into them well before giving birth. As a result, women for whom breastfeeding is not working often make themselves miserable pumping round the clock trying desperately to get their babies this “liquid gold”.

It is unfortunate, especially since despite all the hype, the best research does not find longterm benefits of breastfeeding.

Here’s the thing about those oft-stated benefits to IQ, obesity, and allergies and asthma: They only show up observational studies.

Why does that matter? Because observational studies of breastfeeding all suffer from the same huge flaw: Breastfed infants tend to differ from formula-fed infants not just in how they are fed in infancy, but in nearly every other possible way–in their mother’s education level, in their mother’s IQ, poverty, neighborhood safety, exposure to environmental toxins, race, and type and quality of childcare. In scientific terms, breastfeeding is confounded, out the wazoo.

We cannot tell which benefits found in an observational study derive from breastfeeding rather than from the myriad other advantages linked with breastfeeding.

(The “good” observational studies attempt to control statistically for the other relative advantages of breastfed infants. Unfortunately, controlling for confounds only works well when (1) all the important potential confounds are known, and (2) when there is sizeable overlap between the compared groups. Neither is true when it comes to breastfeeding.)

In an ideal world, we would settle this question by conducting several large randomized controlled trials (RCTs), in which new mothers would be randomly assigned to breastfeed. RCTs are the gold standard in medicine for determining whether a true cause and effect relationship exists. In practice, though, such trials are neither feasible nor ethical.

Fortunately, we have the next best thing: a handful of studies that have cleverly circumvented the problem of confounding. These fall into two categories:

After my friend and I spoke about his irritation with the medical organizations like the American Academy of Pediatrics (AAP) and NHS overstating the benefits of breastfeeding, I was dissatisfied with my vague sense that he was right. I wanted to know exactly which benefits had been oversold and exactly which were supported not just by observational studies but by better-designed studies.

The short answer: Nearly all the alleged long-term benefits are likely the result of confounding, not breastfeeding. Better-designed studies find only a handful of real benefits: a reduced chance of severe gastrointestinal infections and a lower risk of eczema during infancy, and perhaps a small boost in childhood IQ.

Alleged Breastfeeding Benefits According to the NHS

According to the NHS, breastfed infants are…

Sounds pretty impressive, right? Until you set aside the evidence from observational studies… 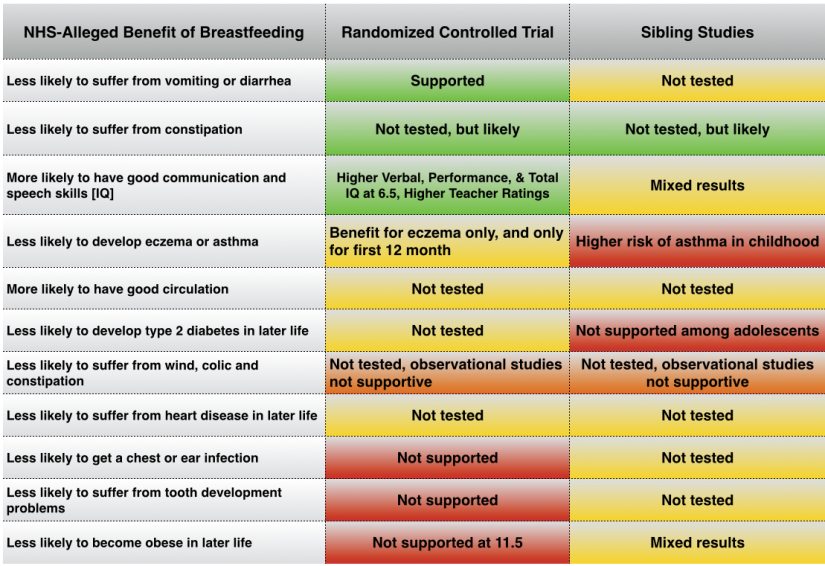 END_OF_DOCUMENT_TOKEN_TO_BE_REPLACED

This is a text widget, which allows you to add text or HTML to your sidebar. You can use them to display text, links, images, HTML, or a combination of these. Edit them in the Widget section of the Customizer.
Site Title
Create a free website or blog at WordPress.com.
Loading Comments...