While over half of mothers in the U.S. drink alcohol while breastfeeding, many of us are foggy on how this does (or does not) affect our babies.

Can you drink a glass of wine while breastfeeding your baby? Or do you need you wait 2-3 hours for the alcohol to clear? And exactly how much alcohol is too much alcohol to nurse?

Doctors and trusted sources like KellyMom and Babycenter give wildly conflicting advice on these points.

But then they go on to say the American Academy of Pediatrics Section on Breastfeeding advises “ingestion of alcoholic beverages should be minimized and limited to an occasional intake but no more than 0.5 g alcohol per kg body weight, which for a 60 kg mother is approximately 2 oz liquor, 8 oz wine, or 2 beers. Nursing should take place 2 hours or longer after the alcohol intake to minimize its concentration in the ingested milk,” and that “many experts recommend against drinking more than 1-2 drinks per week.”

Confusing, right? Is 1-2 drinks harmful to your baby, or not? Is it drinking this much only safe if you wait to nurse?

Or perhaps it depends on how often you have a drink? Would having a regular glass of wine with dinner exceed some unstated limit?

Babycenter makes the case against drinking while nursing sound even more dire: “Will it harm my breastfeeding baby if I drink wine, beer, or hard alcohol? It could if you don’t take precautions. The same amount of alcohol that makes it into your bloodstream makes it into your breast milk.”
Okay, mamas, let’s cut through this self-contradictory muddle and talk facts.
For starters–sorry Babycenter–but the amount of alcohol that makes it into your bloodstream is NOT the same amount as in your milk. Instead (1) your milk contains the about the same percentage alcohol as your blood does after you have a drink. In other words, if you tested at the blood alcohol driving limit of 0.08%, your milk would contain about 0.08% alcohol.
This is an extremely small percent. By comparison, hard alcohol like whisky or vodka contains 20-40% alcohol, wine 12-15%, and beer 4-8%. 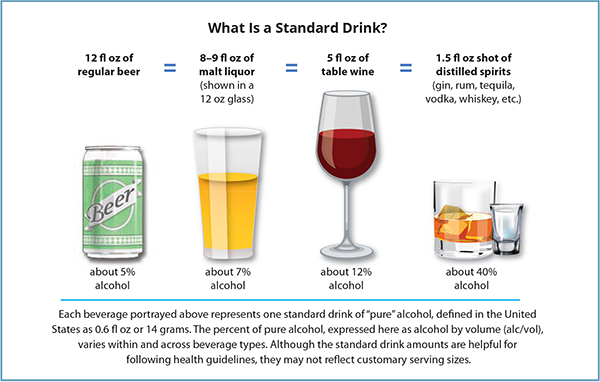 In short, (2) the amount of alcohol in breast milk is extremely small, even at peak concentration 30-60 minutes after drinking.

Let’s say you drink a couple of glasses of wine, the equivalent of 2 standard drinks or about 24 grams of pure alcohol. If you nurse your baby soon afterwards, your baby would ingest only about 32 milligrams of alcohol. That’s less than a hundredth of a percent of your intake.[1]

But could even this trace amount harm your baby, as the American Academy of Pediatrics guidelines to wait several hours seem to imply?

After all, babies do metabolize alcohol more slowly than adults, and their rapidly developing brains could be especially vulnerable to alcohol.

Fortunately, the short answer is no.

(3) Until 2-3 months of age, babies metabolize alcohol at around half the rate of adults. But even if your baby metabolized alcohol at a much slower rate, say a fifth as fast as adults, he would capable of handling the amount of alcohol that passes into breast milk after 1-2 drinks.

Imagine you were to nurse right after downing four shots of tequila.(Note I am not advocating for this, just using it as a hypothetical.)

This would meet the standard definition of “binge drinking”, or consuming 4 or more drinks in one sitting.

Even then, according to a 2014 research review, the amount of alcohol that passes to your baby is so small it is “biologically implausible” it would have any negative effects on your baby,  [2]:

“Assuming the worst possible scenario where a mother engages in binge drinking and ingests four drinks of 12 g pure alcohol and then breastfeeds her child at the time of the maximum blood alcohol concentration, the child would still not have a blood alcohol level of more than 0.005%.

It appears biologically implausible that occasional exposure to such amounts should be related to clinically meaningful effects to the nursing children. The effect of occasional alcohol consumption on milk production is small, temporary and unlikely to be of clinical relevance.” [2]

(5) Moderate drinking while nursing does not lead to motor delays. One oft-cited study found that breastfed babies whose mothers drank had delayed motor, but not cognitive, development at 12 months. Since then, several studies have failed to replicate this finding. They show no negative effects on motor or cognitive development at 8 weeks, 12 months, or 18 months.[1,3,4]

(6) Drinking will not boost your supply. A common myth is that beer boosts milk supply. Interestingly, the belief that weakly alcoholic beverages boost supply is not just found in the U.S. In parts of Mexico, for instance, nursing women drink a fermented agave drink called pulque containing about 3% alcohol to boost their supply.[8]

Yet, despite these common beliefs, the opposite is true: Drinking lowers supply. For the first 3-4 hours after drinking, mothers produce about an ounce less milk than normal [1]. This is true for beer as well as wine and hard alcohol.[8]

Although alcohol boosts prolactin, the main hormone involved in milk production, it simultaneously suppresses oxytocin, the hormone that coordinates the milk ejection reflex.[5–7]

(7) Drinking while nursing will not help your baby sleep. In fact, there’s evidence that babies sleep an average of 20 minutes less after their mother has a drink [1].

After being exposed to small amounts of alcohol, akin to that found in milk after a mother has 1-2 drinks, two studies showed that babies fell asleep more quickly, but then slept for a shorter period of time over the next 3-4 hours. The shorter amount of sleep stemmed from a reduction in active sleep (the phase of baby sleep that corresponds to REM sleep in adults). Babies later compensate for their active sleep deficit by spending more time in active sleep over the next 20 hours. [5] [5,6].

These changes in sleep parallel those seen in adults after light drinking. But not to worry. They are minor and unlikely to have any long-term impact on your baby. The only way they would potentially cause problems is if you were to drink heavily throughout the day.

The amount of alcohol that passes into breast milk is miniscule, less than a tenth of a percent of what you drink. That such trace amounts would harm your baby  is “biologically implausible”, as one research review puts it. Consistent with this, nearly all studies find no harmful effects for light to moderate drinking while breastfeeding.

So why do some medical organizations like the American Academy of Pediatrics recommend waiting at least 2 hours to nurse?

It is hard to understand their reasoning; the evidence is so stacked against them. My guess is that their guidelines stem from an abundance of caution. Perhaps they fear a more nuanced message would be seen as a green light to overindulge.

Of course, as with many parenting decisions, everyone will have their own take. If you do want to err on the side of extreme caution, Motherisk provides clearance times based on body weight and number of drinks.

5 thoughts on “Drinking while nursing: 7 things to know”

This is a text widget, which allows you to add text or HTML to your sidebar. You can use them to display text, links, images, HTML, or a combination of these. Edit them in the Widget section of the Customizer.
Loading Comments...
Comment
×
%d bloggers like this: